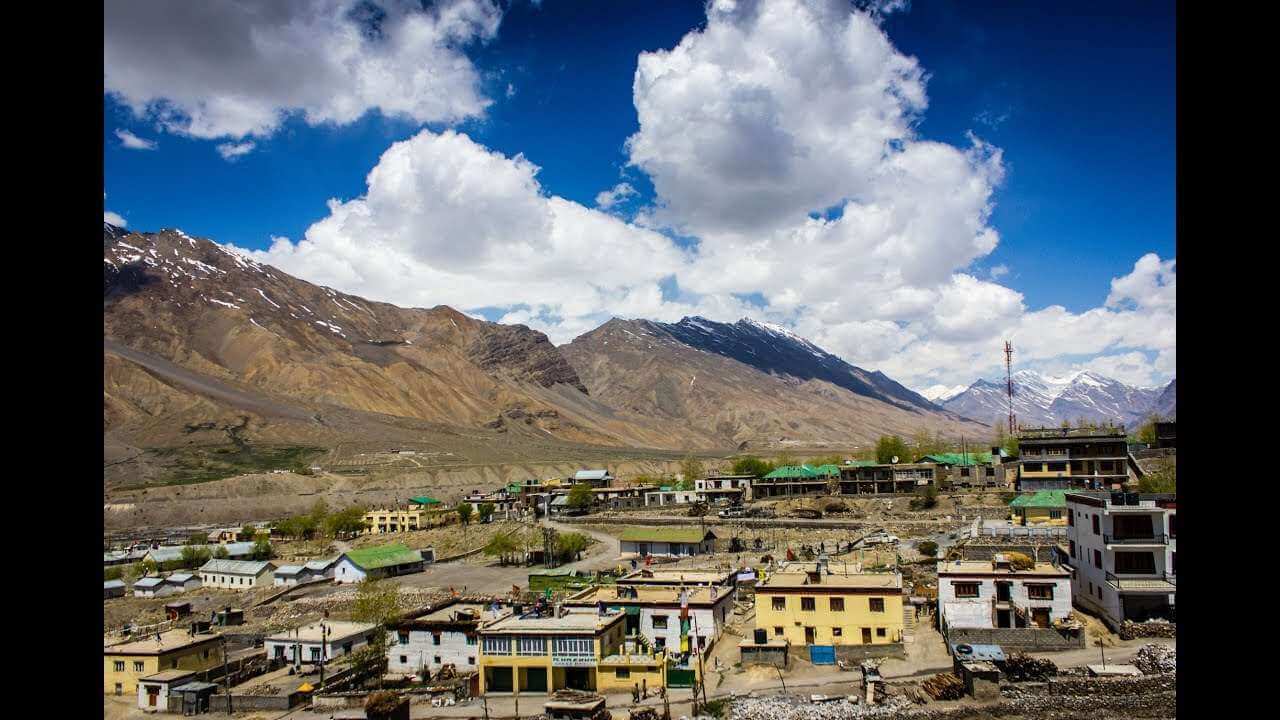 It is surrounded by deodar trees, pine trees, apple orchards, and spectacular snow-covered mountain peaks. Manali offers a variety of food, natural beauty, adventure sports, and ancient heritages. These sights make the town look stunningly amazing. The area is well-known for its street shopping, and it bustles with activities throughout the day. Manali welcomes a large number of tourists every year.

One of the crescent shaped lakes that is located in the middle of the Spiti Valley. The lake encircles a vast meadow that is carpeted with different kinds of wildflowers. The lake is crescent-shaped, and that is how it got its name. This mesmerizing site has much folklore attached to itself. But what lures its visitors is its turquoise blue water, majestic mountains and serene surroundings which make it an apt place for camping.

Nestled in one corner of the beautiful Indian state of Himachal Pradesh. Kaza is packed with majestic snow-covered mountains, bubbling rivers, picturesque landscape, and shimmering streams. This dreamy place is no less than a paradise on earth. The Himalayan town of Kaza features an exotic amalgam of ancient culture and modernity that is sure to leave every traveler totally awestruck and spellbound.

You can also book one of the best adventure Tour Packages with us. In this package tourists experience the thrill activities and scenic view from these places. In this package the hotel accommodation, cab for sightseeing, the meals morning breakfast and dinner are also included in the package. Get exciting deals and offers in your adventure package from Journey Of Himalaya.

On arrival at Delhi/Chandigarh Airport /Railway Station, you will meet assisted and drive towards Manali, on the way sightseeing Like – Sunder Nagar Lake, Pandoh Dam, Hanogi Mata Temple, Vaishno Devi Temple, and visit “KULLU”- River-Rafting, Shawls factory. On arrival in Manali, check in to the hotel and have your dinner. Overnight stay at the hotel in Manali.

Morning, after breakfast, proceed for full day local sightseeing in Manali visit:- “Hadimba Temple” built-in 1553 with a superbly crafted for tried pagoda roof, it is famous for its exquisitely carved doorway. “Club House” with comprehensive facilities that include roller skating, an auditorium, billiards room, a library, a bar, and a restaurant makes a wonderful outing for the day. Tibetian Monastery, Van Vihar, Manu Temple, Jogini Waterfall, and Vashist Temple are well known for their hot springs. There are old temples dedicated to the Saga Vashit and Lord Rama. In the evening visit the famous shopping mall of Manali “Mall Road”. Overnight stay at the hotel in Manali.

The morning after breakfast, check-out from the hotel & Proceed towards Chandratal Lake. On arrival in Chandratal lake, check in to the camp and have your dinner. Overnight Stay at the camp in Chandratal Lake.
Chandra Tall Tso Chicken or Chandra Taal (meaning the Lake of the Moon), or Chandra Tal is a lake in the Spiti part of the Lahaul and Spiti district of Himachal Pradesh (India). Chandra Taal is near the source of the Chandra River. It is a favorite spot for tourists and high-altitude trekkers. It is usually associated with Spiti, but geographically is a part of Lahaul. Kunzum La separates Lahaul and Spiti valleys. Chandra Taal lake is on the Samudra Tapu plateau, which overlooks Chandra river (a Chenab river source). The name of the lake originates from its crescent shape. It is at an altitude of about 4,300 meters (14,100 ft) in the Himalayas. Mountains of screen overlook the lake on one side, and a cirque encloses it on the other. Chandra Taal is a tourist destination for trekkers and campers. The lake is accessible by road from Batal and by road as well as on foot from Kunzum Pass from late May to early October. The road to Chandra Taal branches off from NH-505 about 2.9 kilometers (1.8 mi) from Batal and 8 km (5.0 mi) from Kunzum Pass. This 12 km (7.5 mi) motor road runs as far as a parking lot 1 kilometer (0.62 mi) from the lake. One has to travel on foot for the final 1 kilometre1 km (0.62 mi). It takes approximately two hours from Kunzum Pass to Chandra Taal. Chandra Taal is also accessible from Suraj Tal, 30 km (19 mi) away.

The morning after breakfast, check out from the Camp and get ready to visit Kaza. Before reaching Kaza also visit Ki Monastery & Kibber Village. & Overnight Stay at the Hotel in Kaza.
Kibber Village Kibber is also known as Kyibar. Kyibar is a village high in the Spiti Valley in the Himalayas at 4270 meters or 14,200 ft in Himachal Pradesh in northern India. It contains a monastery and the Kibber Wildlife Sanctuary. Kibber lies in a narrow valley on the summit of limestone rock. It is located 16 kilometers from Kaza and a bus service connects them in the milder summer months. Agriculture forms the backbone of the local economy and lush green fields are abundant. Villagers count on the 3-day traditional trade route over Parang La to Ladakh to barter their horses for yaks or to sell for cash. The village has around 80 houses, unique, given that they are made of stone instead of mud or adobe brick used extensively elsewhere in the Spiti valley. Kibber Monastery was founded by Serkang Rimpoche of Tabo.
Ki Monastery Kye Gompa (also spelled Ki, Key or Kee – pronounced like English key) is a Tibetan Buddhist monastery located on top of a hill at an altitude of 4,166 meters (13,668 ft) above sea level, close to the Spiti River, in the Spiti Valley of Himachal Pradesh, Lahaul and Spiti district, India. It is the biggest monastery of Spiti Valley and a religious training center for Llamas. It reportedly had 100 monks in 1855.

The morning after breakfast, check out from the hotel and proceed back to Manali Via Kunzum Top, Batal, Bada Darra, Chhota Darra, Gramphu & Rohtang Pass, Solang Valley. You can do various adventurous activities in Solang Valley like Paragliding, Ropeway, and Skiing. On arrival in Manali, check in to the hotel and have your dinner. Overnight stay at the hotel in Manali.
Rohtang Rohtang Pass is named as such due to people working in bad weather trying to cross the pass). It is a high mountain pass (elevation 3,980 m (13,058 ft)) on the eastern end of the Pir Panjal Range of the Himalayas around 51 km (32 mi) from Manali. It connects the Kullu Valley with the Lahaul and Spiti Valleys of Himachal Pradesh, India. The pass provides a natural divide between the Kullu Valley with a primarily Sanatan culture (in the south), and the arid high-altitude Lahaul and Spiti valleys with a Buddhist culture (in the north). The pass lies on the watershed between the Chenab and Beas basins. On the southern side of this pass, the Beas River emerges from underground and flows southward and on its northern side, the Chandra River (flows from the eastern Himalayas), a source stream of the river Chenab, flows westward.

The morning after breakfast, check out from the hotel and leave for Chandigarh/Delhi to see on the way sightseeing – “KULLU”, River Rafting, Kullu Valley, Shawls Factory, and drive towards Chandigarh and drop at Railway Station/ Airport to catch onward Train / Flight:: 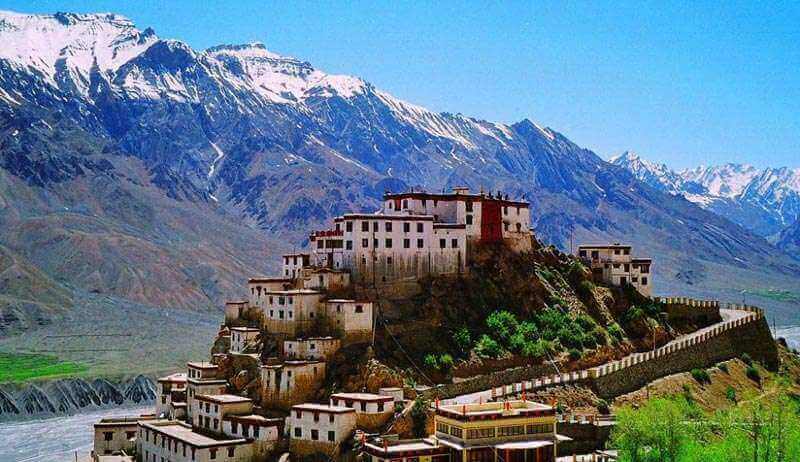 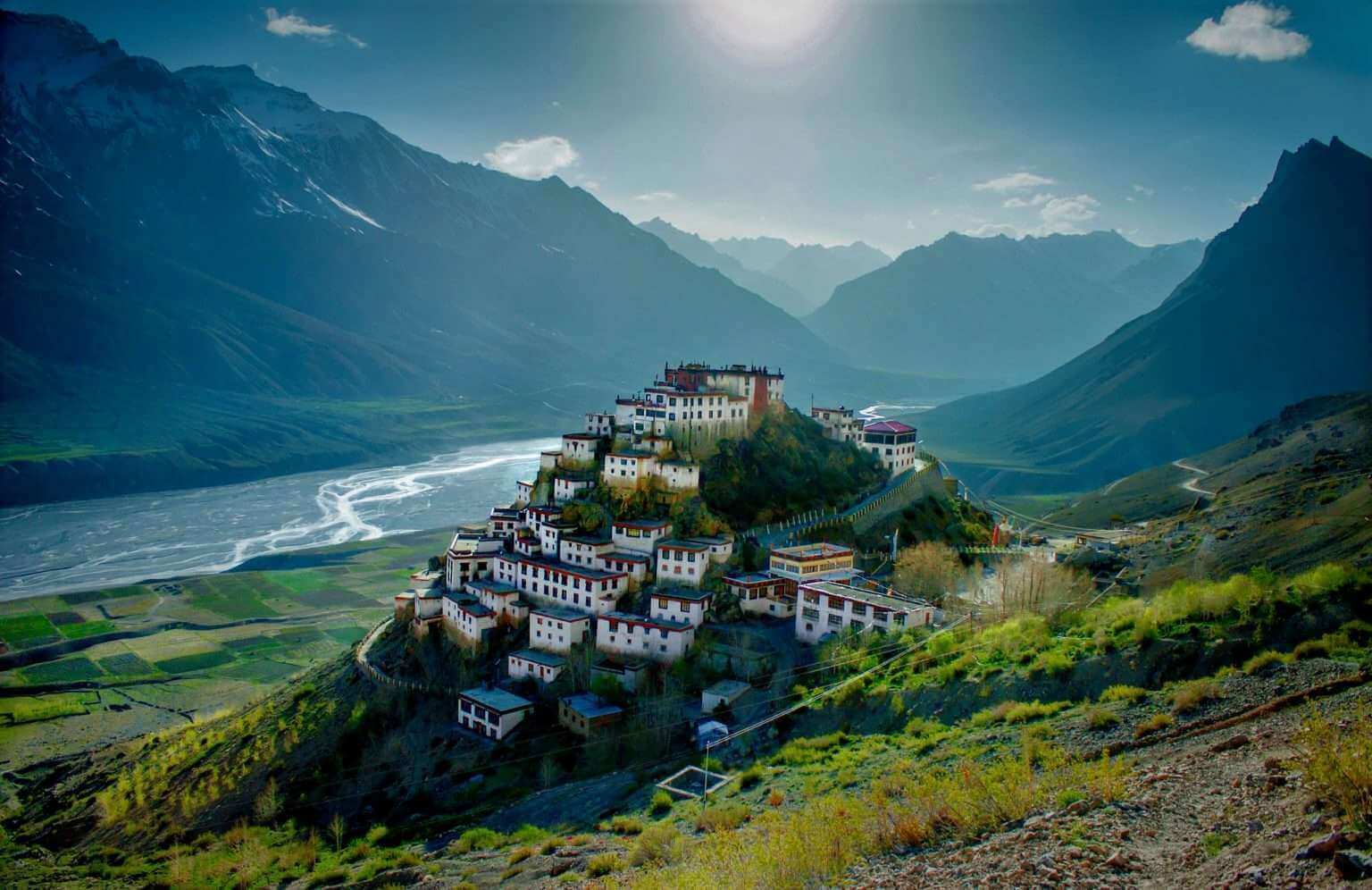 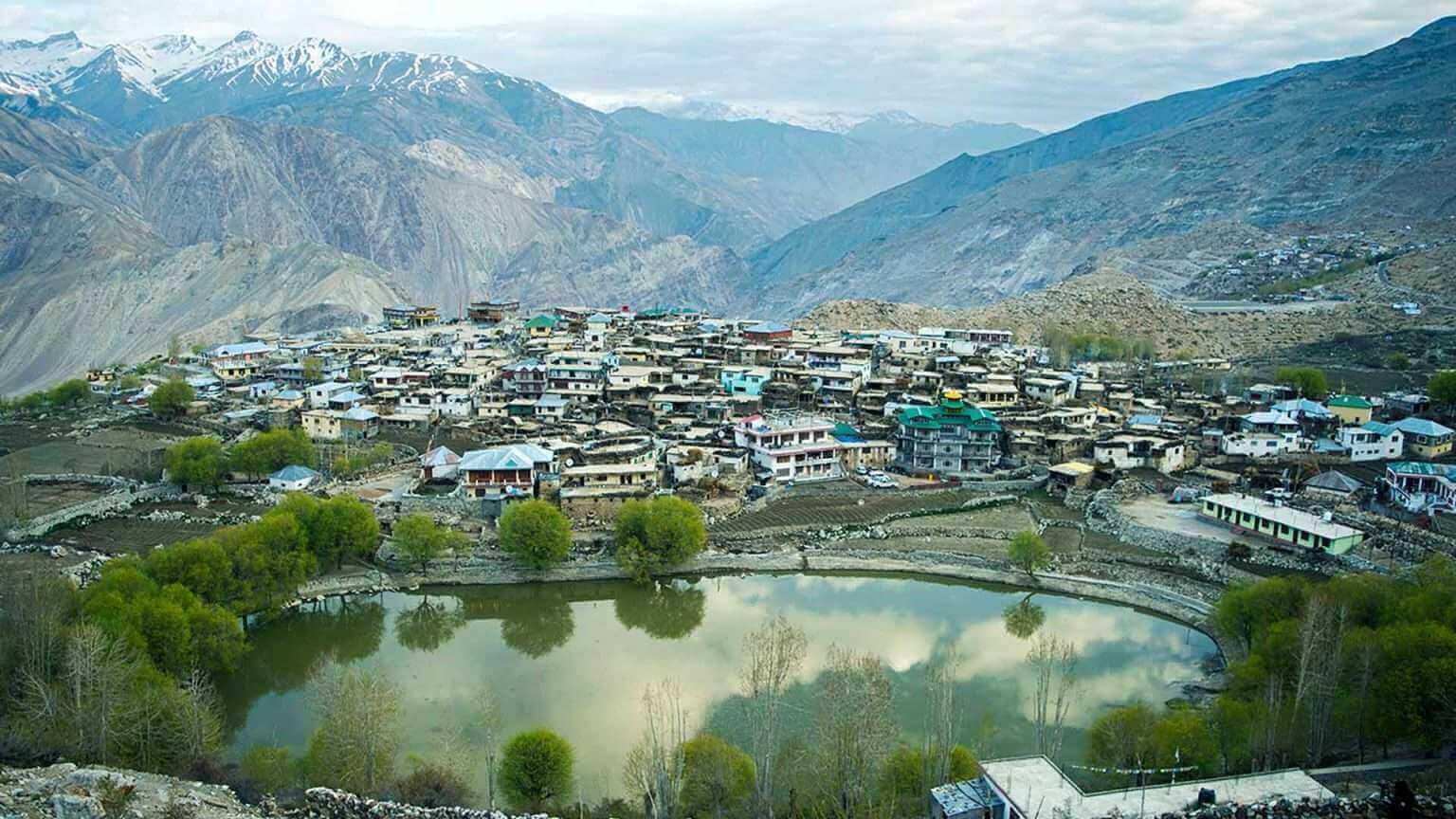 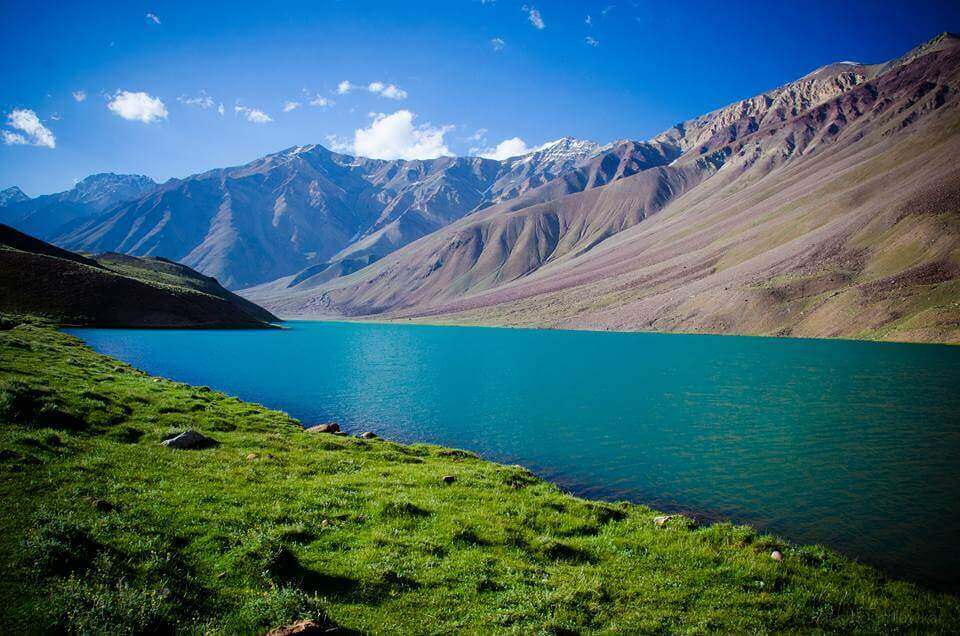